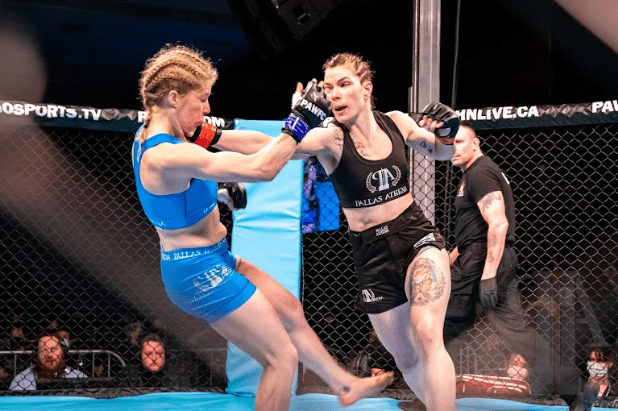 The rules of women’s mixed martial arts have changed drastically since its inception. Over time, the audience learned the combat styles, saw the danger, and as a result, wanted more practical regulations. This perception of anarchy was modified, and Canadian women’s MMA was soon acknowledged as a fair and honest sport.

The new specified regulations contained the requirements that now guide the sport to this day.

For hand protection, open-fingered gloves are presented to lessen the chances of scrapes, scratches, cuts, etc., on the fists. As a result, this enhanced fighter confidence in striking, which led to more exciting matchups.

In most professional fights, participants wear 4 oz gloves. However, in other styles, amateurs have to sport 6 oz gloves for more satisfactory protection of the fists, wrists, and hands.

Time limits were established to avoid more prolonged fights with less action and the unpredicted broadcasting of live events. In most professional fights, there are 3 matches with 5 minutes each. However, in title match-ups or championship rounds, the fights are typically 5 matches at 5 minutes.

Rules may vary from championship to championship. For example, ONE Championship (a Singapore-based organization) permits knees, kicks, and elbow strikes to the head (due to the incorporation of muay thai) but outlaws head stomps.

A fighter is announced as the victor, either by the judges or by referee call in instances such as:

If a fighter strikes her competitor and the competitor cannot continue, the striker triumphs, and the round ends so the opposing fighter doesn’t sustain further injury.
Moreover, a fighter can submit herself (accept defeat) by the following acts:

Additionally, technical submissions are also available. This submission type is when the referee stops the match if the fighter is trapped in a submission hold and in danger of injuring herself. The submission typically occurs when a fighter is choked unconscious or a bone breaks.

A referee communicates a technical knockout in the following circumstances:

As Canadian women’s MMA continues to evolve, so do the rules and regulations that guide the sport. However, this concept is a good thing. It helps make matches safer for fighters, allowing them to continue doing what they love while entertaining the crowds and fans along the way.